What’s the difference between BJJ and Wrestling?

What martial art is best for you? A lot of that will come down to a preference: Do you want to learn how to grapple, or learn how to strike? At Gracie Smeaton Grange, we teach the latter.

Students from Campbelltown, Camden and Sydney’s Southwest come here to learn Brazilian Jiu-Jitsu, a preeminent form of grappling. Unlike Karate, Muay Thai, Taekwondo and many others, there’s zero striking in Jiu-Jitsu. You’ll learn how to defend against strikes, but not perform them yourself.

The difference between Brazilian Jiu-Jitsu (BJJ) and these striking-based arts is easy to understand. But what about BJJ compared to other grappling arts? Judo and wrestling are both popular , and like BJJ teach effective self-defense grappling skills.

Here we’ll focus just on wrestling, as Judo’s difference to BJJ is a whole other topic. The short story: Wrestling is great, but relies more on power and athleticism. BJJ is more about timing, leverage and efficiency. Read on for a longer explanation. 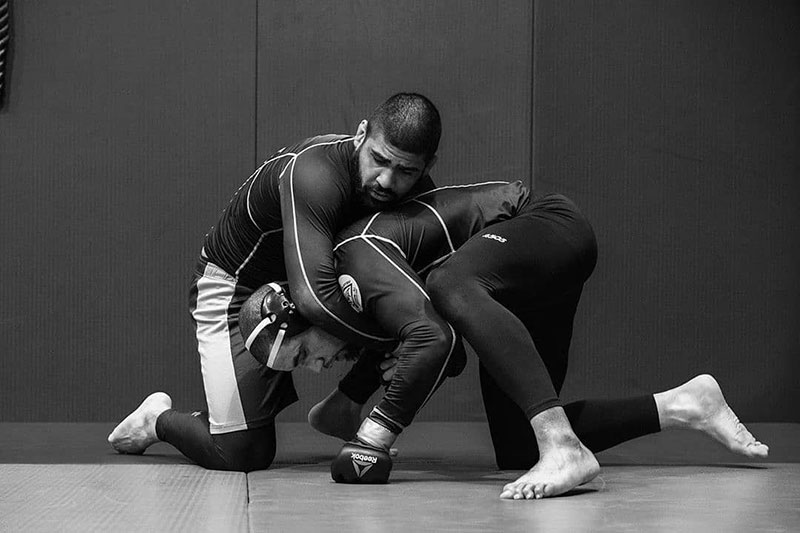 On the surface, wrestling and BJJ look similar. Both involve takedowns and a focus on ground-based grappling. But there’s one fundamental difference. Wrestling ends when you pin your opponent’s shoulders to the mat. In Jiu-Jitsu, you can be just as deadly from the bottom as you can on top.

A key part of BJJ is the “guard”, the area from your hips to your toes. To score points and secure a mount, your opponent needs to get around your legs, what we call “passing” the guard. Many Jiu-Jitsu practitioners build their whole game around defending and attacking from their back. It’s called “playing guard”.

If you sign up to Gracie Smeaton Grange, you’ll learn how to be extremely dangerous from your back. Meanwhile, traditional wrestling is about avoiding this position at all costs.

Of course, this isn’t the only difference between the two arts. BJJ has two training styles — Gi, where you train in a kimono and in which grips are allowed, and No Gi — while wrestling only has one. Competitions are also different, with Jiu-Jitsu being a one-round fight, while wrestling takes place over three rounds.

But these are largely cosmetic. The different approach to back position causes profound differences when it comes to the philosophy and mechanics that underpin the two arts.

The guard is a central feature of Jiu-Jitsu, and features in every sparring session. Getting caught in someone’s guard is like your car getting stuck in the mud, and it takes painstaking effort to get out.

This is one of many ways in which BJJ is more beneficial for smaller, weaker practitioners. The guard allows you to restrain someone while you’re on your back. This helps neutralize size and strength advantage since you don’t need to get on top of your opponent to restrain or threaten them.

Contrast this with wrestling, which focuses on takedowns and then a scramble to secure a pin. Wrestling is more explosive than Jiu-Jitsu, while Jiu-Jitsu is more methodical.

This isn’t a knock against wrestling, which is also very technical. It’s just that Jiu-Jitsu is specially designed to be used against bigger, stronger opponents. By contrast, wrestlers are trained to be big, strong, explosive and enduring.

“Always assume that your opponent is going to be bigger, stronger and faster than you,” says BJJ co-founder Helio Gracie in a famous quote, “so that you learn to rely on technique, timing and leverage rather than brute strength.”

What’s right for you

When people discuss martial arts, they often talk about which is “the best”. The truth is that both have strengths and weaknesses. It’s true that BJJ practitioners sometimes rely too much on defending from their back. Meanwhile, wrestlers’ emphasis on power and explosiveness can obstruct the proper learning of technique.

A better way to approach it: Which is best for you.

If you’re tossing up between wrestling or Jiu-Jitsu, there are a few questions you should ask yourself. How athletic are you? How big are you? How much do you care about details?

If you’re a fitness freak and are after the best possible workout, for instance, you’d probably enjoy wrestling more than BJJ. Jiu-Jitsu is an excellent full-body workout, but it doesn’t focus on cardio, explosivity and power in the same way that wrestling does.

But if you’re smaller, weary of injuries, or more interested in self-defense, you’re likely to find more benefit in Brazilian Jiu-Jitsu. It’s a martial art that’s more about strategy and technique.

For practitioners of either martial art, there’s also fantastic benefit in cross training. Jiu-Jitsu enthusiasts can learn many takedown skills from wrestlers. Wrestlers, especially smaller ones, will benefit from seeing that a fight doesn’t end once you’re on your back.

If you’re in Camden or Sydney’s Southwest and are interested in learning Jiu-Jitsu, come into Gracie Smeaton Grange for a free class.