Self-defense skills are valuable for any stage of life, but they’re perhaps most essential, both physically and emotionally, for children. Brazilian Jiu-Jitsu, or BJJ, is a martial art that helps make your kid bully proof.

BJJ originated in Brazil (as the name implies), with the Gracie family opening the first academy in 1925. Since then, it’s become a worldwide phenomenon. Its predominance in the UFC — with BJJ proving to be an essential skill for mixed martial artists — helped it explode in popularity among adults. But it’s an art that’s truly invaluable for kids and young adults.

At Gracie Smeaton Grange, we teach people of all ages: Kids, teenagers and adults. Though there are exceptions, we generally believe 5-years-old to be the earliest age to introduce Jiu-Jitsu into a child’s life.

But maybe we’re getting ahead of ourselves. If you’re a parent choosing which martial art to sign your kid up to, you may be asking… 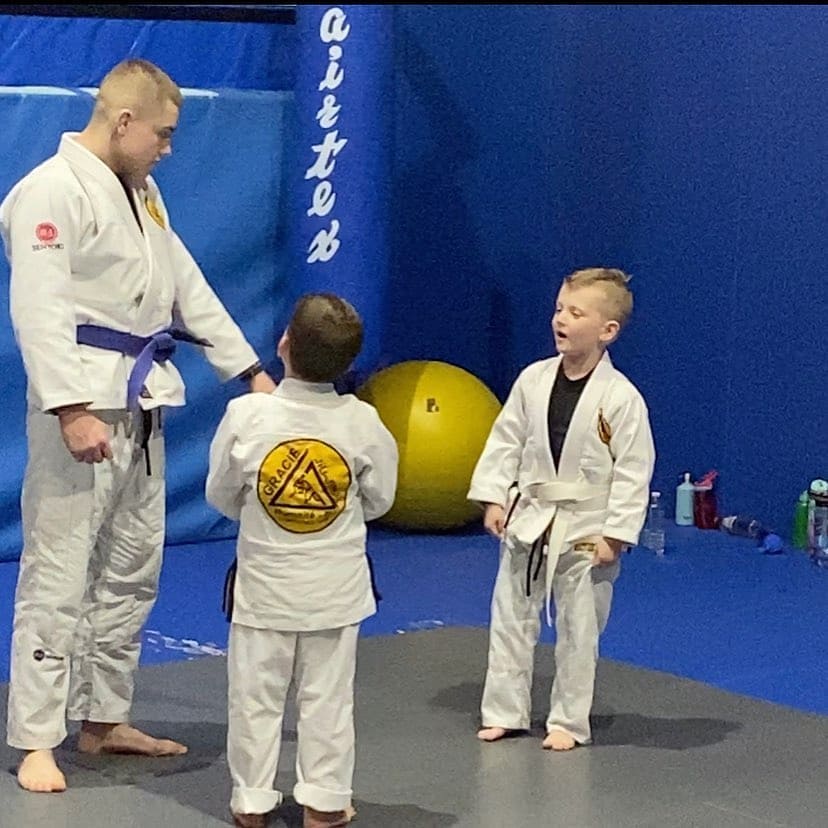 Why is BJJ good for kids?

Brazilian Jiu-Jitsu is not the only martial art in which children can learn self-defense skills. But most other martial arts, to truly be effective, require strength, power, speed or some other kind of athleticism in addition to technique. This is where BJJ is different.

Jiu-Jitsu is a grappling martial art that mostly takes place on the ground. This makes it unlike other grappling arts. Judo, for instance, is standing-based grappling, while wrestling ends once your shoulders are pinned to the mat. In BJJ, some of the most devastating attacks are performed from your back.

The idea is that taking an opponent to the ground significantly hinders any physical advantage they may have. It certainly helps to be strong in BJJ, but it helps far less than it would in other martial arts because operating from the ground neutralizes much of your strength advantage. This is one BJJ’s defining principles: Everything is about technique, not strength or power.

In other words, Jiu-Jitsu is designed to give children the tools they need to defend themselves against bigger bullies.

“Jiu Jitsu is for the protection of the individual,” said Helio Gracie, one BJJ’s founders, “the older man, the weak, the child, the lady, the young woman – anyone who lacks the physical attributes to defend themselves.”

In BJJ, your child will learn how to de-escalate a potential confrontation. They’ll also learn how to subdue a larger opponent without hurting them. This is a key skill: Not all bullying situations call for the bully to be harmed.

But for the extreme circumstances where aggression is warranted, BJJ practitioners also learn how to apply submission holds that will repel a bully for the long term.

As a self-defense system, BJJ is second to none. But its benefits don’t just derive from martial arts techniques. It also gives children a mental and emotional toughness — which is likely to prevent them from being bullied in the first place.

Jiu-Jitsu is an incredibly practical martial art. This is reflected in training. Sparring is a part of every martial art, but it’s a much larger part of BJJ. Unlike striking arts like karate or Taekwondo, in which practitioners only begin sparring against resisting opponents after many months or even years of training, adults begin sparring against each other in BJJ from their first class. In Jiu-Jitsu, we call this “rolling”.

Of course, it’s different for children. Safety always comes first at Gracie Smeaton Grange, and we never make kids who are too young spar. And regardless of age, we always ensure children are sufficiently comfortable with their environment before they begin rolling with anyone. But once your child does start sparring, they’ll learn many fantastic skills and traits.

First and foremost is confidence. It’s one thing to practice a roundhouse kick against a wooden block. It’s another to learn a self-defense technique and then successfully use it against a resisting opponent. Doing the latter makes a child confident and self-assured. And as we know, bullies typically pick on people who are insecure, or who the bully perceives to be weaker than themself.

Sparring also teaches your child resilience. Jiu-Jitsu is not easy. It comes with a lot of failure and discomfort, as sometimes it can take months to nail a technique or figure out the weaknesses in your game. But through this difficulty comes growth, and the ability to become comfortable in uncomfortable situations.

Again, it’s this kind of self-assuredness that can allow your child to avoid confrontation in the first place. At the end of the day, we believe the best self-defense is to just walk away. BJJ equips your child with the mental and emotional skills that make that easier.

But if a confrontation with a bully does arise, your child will be more than ready for that too.

If you’re a parent in Camden or Sydney’s Southwest and are interested in your kid learning Brazilian Jiu-Jitsu, feel free to bring them in to Gracie Smeaton Grange for a free trial class.