There are many reasons to train martial arts. Some want to hone their self-defense skills, while others look for a sport they can sink their teeth into. For many, martial arts is about health and fitness. Brazilian Jiu-Jitsu is an excellent martial art for all three.

Gracie Smeaton Grange is home to martial artists from Camden, Campbelltown and suburbs all over Sydney’s Southwest. We teach Brazilian Jiu-Jitsu (BJJ), a grappling art that’s all about subduing and submitting your opponent.

Almost every popular martial art offers fitness benefits, but BJJ has some features that make it particularly worthwhile for those looking to make their lifestyle more healthy.

If you pick up Jiu-Jitsu training, you’ll be able to burn fat, improve your cardiovascular and respiratory fitness, as well as build some muscle. You’ll also work important core muscles that are hard to train otherwise. 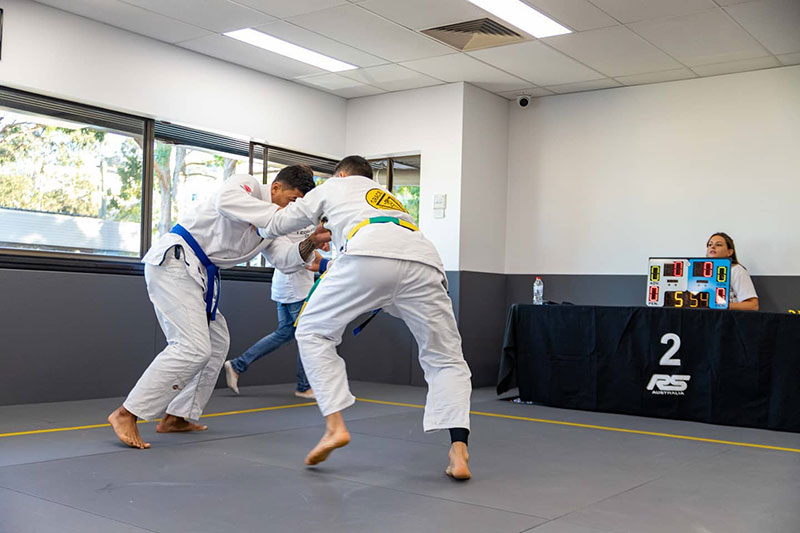 First, a quick rundown on what separates Jiu-Jitsu from other martial arts.

As noted, BJJ is a grappling martial art. This makes it fundamentally different to the likes of Taekwondo, Kung Fu, Karate, Muay Thai and other arts you may know. At Gracie Smeaton Grange, you’ll learn to defend against strikes but not how to perform them. There’s no punching or kicking in BJJ.

That makes it more similar to the likes of Judo or wrestling. BJJ is unlike Judo, though, in that Judo is centred around stand-up grappling, while Jiu-Jitsu takes place mostly on the ground. Similarly, wrestling revolves around pinning your opponent’s shoulders to the mat. In Jiu-Jitsu, you can be just as dangerous from your back as when standing up.

The idea behind Jiu-Jitsu is that martial arts should equip you to defend yourself against a larger opponent. It prioritizes timing, technique and leverage over athleticism. But that doesn’t mean BJJ doesn’t make you more athletic.

Every BJJ class begins with a warmup. This lasts between 10 and 20 minutes, and involves dynamic exercises to get your blood flowing. This itself is a solid workout, as it includes many core-building exercises.

But every martial art has a stimulating warm up. One key practical factor that differentiates Jiu-Jitsu is its focus on sparring. You’ll practice many striking arts for months before you can spar against a resisting opponent. In Jiu-Jitsu, you’ll spar – or “roll” as we call it – from your very first class.

Rolling takes place at the end of a lesson, usually the last third of each class. (That’s the last 20 minutes of a one-hour class, or roughly the last 30-40 minutes of a 90-minute class.) It’s a fantastic workout.

It’s anaerobic exercise, much closer to high-intensity-interval training than standard cardio. You’ll train your respiratory and cardiovascular system in a unique way, but it’s great for your muscles too. That’s because BJJ involves a variety of dynamic movement: You’ll hold an opponent’s weight back, push them, pull them and everything in between. You’ll use your hands, arms, shoulders, core, hips and legs as you jostle for position and submission.

Jiu-Jitsu works out almost every part of your body. Though you won’t get an Arnold Swarzenegger body from BJJ, you’ll be able to gain muscle, shred body fat and improve your cardiovascular and respiratory fitness.

Although accidents happen in every athletic endeavor, BJJ is a very safe martial art. Because there’s no striking, you’re at minimal risk of copping a unprotected blow to the head. Because it takes place mostly on the ground, you avoid the body slamming involved in Judo and wrestling.

This has important consequences for fitness. It means you can grapple at full intensity with a similarly-skilled training partner with limited risk of injury. Few other martial arts allow you to train at 100% effort in such a way.

Of course, simply training Jiu-Jitsu won’t turn you into a super athlete. But frequent BJJ training mixed with a diet filled with vegetables and ample protein for recovery, as well as solid sleeping schedule, is sure to make you feel stronger and fitter.

BJJ’s intensity works wonders for your fitness, but it’s also part of why Jiu-Jitsu is so excellent for self-defense. It helps prepare you for what a real-world scuffle will feel like. It’s one thing to practice martial art techniques on a willing training partner – or a block of wood – but another to do so against a completely resistant opponent.

If you’re in Camden, Campbelltown or Sydney’s Southwest and are interested in a more healthy lifestyle, come into Gracie Smeaton Grange for a free trial.